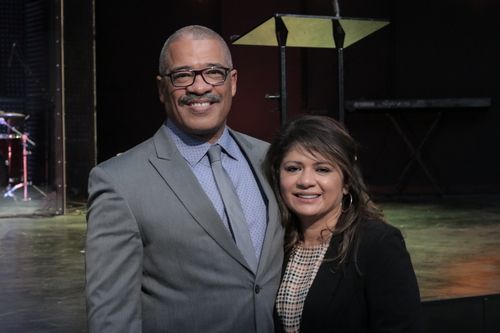 Pastor Tyrone was raised in Christian faith from an early age at the church his grandfather pastored. His passion for the Word of God and his love for the local church were established there. As a young man he led the youth ministry and later began teaching a home Bible study with a group of new believers in his community who didn’t have a church home yet. During this time the Lord began to place the desire in his heart to plant a church. His vision was to teach the simple truth of God’s Word and grow healthy disciples. After a season of prayer and counsel, CTC (Calvary Temple Of Christ) was launched on July 4, 1993 with 6 people. From the very beginning, the church began to grow. From 1993 to 2007 they met in 5 different locations as they continued to expand and outgrow each meeting place. In 2003 CTC was blessed with 10 acres of a 20 acre parcel on County 13, between Ave 3E & 4E.
When the building was completed they held their first corporate service there on August 20, 2007. The facility is a 24,000 square feet 2 story building that will seat 600.
The building is also designed for future expansion to seat 1,200 with accommodations for a school, missions training center and a Bible college.

During this season of growth the ministry also changed it’s name from “Calvary Temple of Christ” to “Church for The City”. Internationally, CTC has locations in San Luis, MX., Giyani, South Africa, and Chandigarh, India. In every location “we are creating a place where people encounter the reality and Presence of God.”

Pastor Tyrone and Virginia have eight children between them. Tyrone (wife Karina & daughters, Aria and Mila); Liana ( married to Alex and they have Elcie and Elenie); Eli Eli (married to Laura and they have Leah and Lina); Obed (married to Natalie and they have Yasiel and Alaia), and Tecia all reside in Yuma, AZ. Jermaine (wife Joanna) reside in Phoenix, AZ. Tiffany in Scottsdale, AZ. Malachi  resides in Los Angeles.